If you are a World of Warcraft fan who has never graced Azeroth for a very long time, then now is the time for you to reconsider going back after its Legion expansion. Whether you are a continuing player or left the game years ago, the new updates on Legion are bound to attract all World of Warcraft fans from wherever they may be. Here are 5 reasons why you should play WoW after the Legion release;

Many players wanted demon hunters as a hero class in the release of Warlords of Draenor but it seems Blizzard were thinking of something else at the time. However, Legion has demon hunters as a hero class. Anyone who has played WoW will tell you that Demon Hunters are just but the coolest things in the entire game. They have supercharged powers and can double jump, see their enemies via solid obstructions and glide through the air. Furthermore, they start off at level 98. Whether you want to just test out how Demon Hunters are like or want it to be your main, this class will definitely be a popular choice among WoW players. 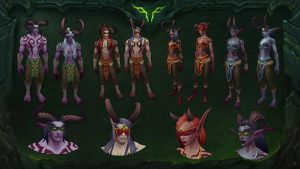 Were you having a hard time storing stuff in the previous WoW bags? Then Blizzard have come up with a solution for this. They’ve introduced a new transmogrification system that is far better than the one that was there before. Its new “wardrobe” remembers anything that you have ever had before even if you deleted it. You don’t have to redo quests again in order to obtain gear needed for other quests with the new transmog system. Furthermore, the new transmog system is account wide, how cool can it get.

Legion has introduced a new class system that allows players in the same class to be able to see each other. Previously, players in WoW were very isolated from each other which led to complains that this was making the game boring. Blizzard then decided to introduce a garrison system where players of the same class hang out. In this system, a player from another class can’t access the garrison of another class but only theirs. This gives players a place where they can compare with players from the same class and enhances the social experience.

Blizzard have introduced a new artifact class weapons for different classes and unique to each class. You can now be able to play a weapon like Retribution Paladin without having to wait for endless quests in order to unlock it. Furthermore, the more you increase and rise in power in the game, the more you gain access to more abilities and get customisation options for your artifacts.

Blizzard understands that there are WoW players who might have stopped playing a while back and definitely do not want to start all over again. As a result, the Legion release gives players a free level 100 character boost for any character class of their choice. This means that you can now get right into the action from the start and you don’t have to spend a lot of time accumulating enough power in the game.

If you are a new player or an existing one who forgot how World of Warcraft used to feel like, then these 5 reasons should be reason enough to start playing the Legion expansion of WoW.